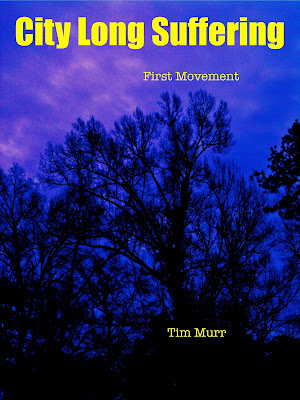 So my new e-book dropped this past March and I've gotten some positive on it. Here's the description from Smashwords;

On the first day of summer, a mass murderer called The Terrible Head, resurfaces after two years. On the first day of summer, Maupins City will know suffering. City Long Suffering; First Movement launches a saga of Southern-fried crime and horror from the author of Conspiracy of Birds and founder of the blog Stranger With Friction. Detective Porter Grey's career has been defined by his pursuit of the Terrible Head, who terrorized Maupins City for more than two decades. Even after he was caught, Detective Grey knew it wasn't really over, he just didn't expect it to be so personal. Or that so many people would be dragged to hell with him.

$2.99, available across all e-readers with a read on-line option. Click HERE for the download.
Posted by Tim Murr at 1:39 PM

Tim Murr
Author, journalist, and publisher. Tim Murr runs St Rooster Books with his wife Stephanie, who handles the art duties on the book covers and promotional materials. We specialize in crime, horror, literary fiction and some non-fiction work.

Previously on Path of Most Resistance...